Some evidence to show examples of how a project such as Street Angels can impact a community or how the Binge Drink culture has changed since 2005:

"Booze-fuelled violence in Halifax town centre has almost halved over the last year. The dramatic drop is the biggest reduction in the whole of West Yorkshire and it follows a drive by police and partner agencies to make the area a safer place for a night out.  "People are much more likely to come to the theatre or go for a meal now than they were 18 months ago," said Insp Vince Firth.  He said reports of violent crime had fallen by 42 per cent over the last 12 months.  "I am delighted the work is starting to make a difference," he said."

"Crime and antisocial behaviour on Saturday nights in Northallerton dropped by 30% in the year since the Street Angels scheme was introduced to the town.

The Street Angels are volunteers who patrol Northallerton on a Saturday night to provide reassurance and support for anyone in need of help."

"Christian charities are welcoming official government figures which show binge-drinking amongst people aged 16-44 fell by a third between 2005 and 2013.

The Portman Group has today (22/4/2015) announced that alcohol related crimes are decreasing across all regions of England... 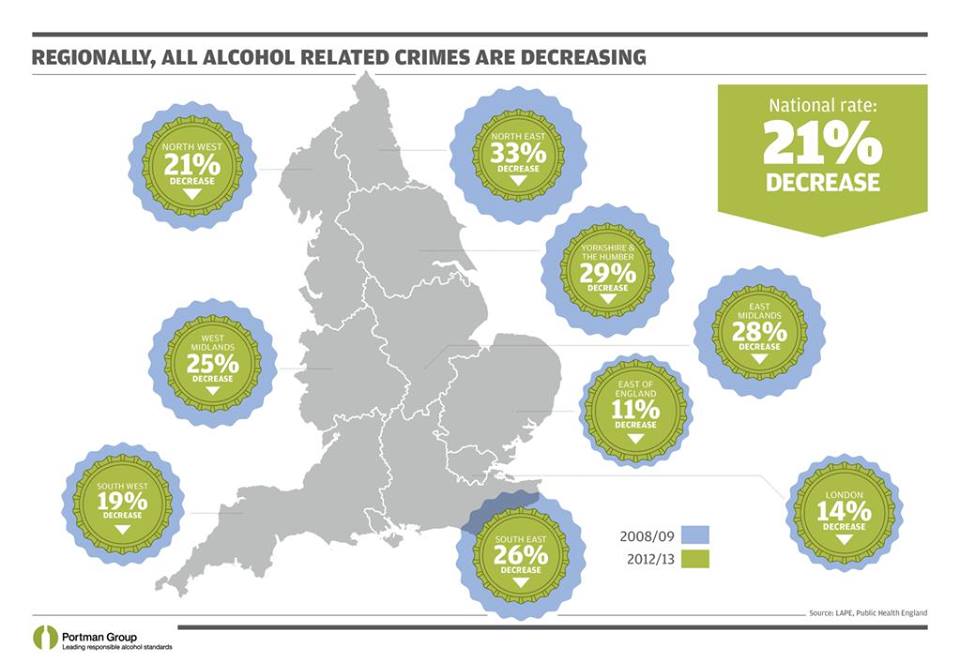 "VOLUNTEERS from a Chichester group working to combat crime have lots to celebrate.

City Angels is not only celebrating its second birthday – but data from Sussex Police shows the team has also helped to reduce anti-social behaviour and crime on the streets of Chichester.

The figures – which include a 58 per cent reduction in anti-social behaviour on Friday nights and an 82 per cent drop in assaults with injury on a Saturday night – are based on a comparison between 2011 and 2013.

“City Angels has been an amazing success to date, beyond what we could have ever hoped for as we dreamt up the project,” said Dan Slatter, the pastor of Revelation Church.

“The evidence shows that it continues to  have an incredible impact on crime and disorder on our city centre streets. When I was informed of the latest police crime data, my jaw hit the floor. “It’s amazing what a diverse yet normal group of people inspired by their faith can do.”

City Angels is run in association with Sussex Police and Chichester District Council.

Inspector Will Rolls from the Chichester neighbourhood policing team said: “This latest data highlights the excellent impact of the City Angels in Chichester, as part of the ongoing work to make Chichester a safer place to live, work and socialise.”"

"CRIME in a town centre has been slashed, and it’s all thought to be down to a volunteer group.

​Anti-social behaviour in Hitchin town centre reduced by more than 40 per cent on Saturday nights within the first six months of Hitchin Street Angels starting up."


Anti Social Behaviour down by 25% in North Yorkshire - report

"Assistant Chief Constable Iain Spittal, author of the report, said dedicated operations and the use of special constables had helped tackle the problem.

He also praised the work of the Street Angels scheme – which sees volunteers patrol the streets of North Yorkshire to help people who are vulnerable on nights out – and the work of night marshals."

"A crackdown on anti-social behaviour centred on the night-time economy in a Surrey town has resulted in a 21% reduction, police have said.

Mr Davies said volunteer Street Angels, who have been working to help vulnerable people out and about in Woking since February 2011, were "absolutely amazing"."


Street Angels contributed to the 2014 paper Drunken Nights Out: Motivations, norms and rituals in the night-time economy - download